Karuppu Sami (also called by many other names) is one of the regional Tamil  male deities who is popular among the rural social groups of South India, especially Tamil Nadu and small parts of Kerala. He is one of the 21 associate folk-deities of Ayyanar and is hence one of the so-called Kaval Deivams of the Tamils.

Following is the story heard by word-of-mouth from the pujaris or Sami aadis in Alagar Kovil, Madurai.
Lord Rama had sent Sita to the forest when she was pregnant and lived in Saint Valmiki’s Ashram.
While in the Ashram, She brought a male heir of Rama to the world.
One day when she was going out for some chores of the Ashram, she asked the Saint to take care of her child in the cradle. The Saint was watching the child and meanwhile went into a deep meditation. When Sita returned, she found that the Saint was in meditation and didn’t want to disturb him to tell him that she was taking her child.
When the Saint was out of the meditation, he found the child missing. So he put some holy grass (Dherbai) in the cradle and with his mantra he made that as a child.
Later when he found that Sita was having her real child, he was so confused and asked Sita to treat the new baby also as her own child.
When Sita was returning to Rama, he was expecting only one male heir. But to his astonishment, he found two boys (Lavan and Kushan) approaching him. Again to test the purity of the boys, he set a fire and asked the boys to cross the fire to reach him. He told that whoever was his real heir would cross the fire unscathed. Unknowingly the boy brought up by the Saint, stuck in the middle of the fire and burnt his body becoming very dark.
Finally, Rama got to know what had happened in the forest to have two boys instead of one. Then he blessed the burnt boy to become his escort god (kaval deivam) and called him “Karuppannan” which became Karuppa Sami.
That was the reason why Karuppa Sami put the sacred tri-strips (Thiru Namam) on his forehead. And also I heard that while calling the deity, the pujaris sing that “Dherbaiyil pirandhavane (born from the holy grass)”. 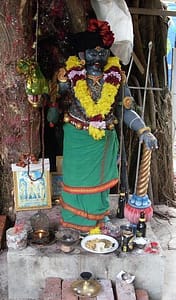 The main form of worship of Karuppanar in the shrine is a formless stone which has been decorated with a Turban and a Dhoti with flowers and garlands. He wields an “Aruval” which is a long form of machete resembling a scimitar, a sword, sometimes a lance, a trident and a smaller knife.
The Aruval is a very significant weapon in Tamil Nadu and is considered, in itself, as a symbol of Karuppanar himself. Some Aruvals may reach the height of even 5 feet, especially the ones in Thiruppaachhi.
The Most Important musical Instrument Which like by God karuppanan are Tappu, Tharai, kombu Tharai, Otha thamukku, Pambai, Udukkai and Urumee.
It is also believed that the Alagar Koil belongs to Kallar community of Madurai. They are basically non Brahmins and they are dacoits turned as senapatis (soldiers) of madurai. They inturn does the job of securing the land for the sake of the society as per the king’s order. In Tamil kallan means thief and kallanthiri is the village where the kalla(thief) – algar(smart) temple is located.
They converted “kalla -alagar to perumal an incarnation of vishnu by wearing a nama on the forehead of all statues.Now the main deity has turned to Vishnu. Thus karuppa samy has become kaval karuppu and his sword has been hanged in the door step (no deity for karuppa samy).
The 18 steps stands for the letters “Ja” “ya”. In old Indian languages “ja” stands for 1 and “ya” stands for 8. To say winning lord they said “jaya” karuppanasamy or 18 padi karuppasamy.
Karuppasamy is an alcoholic, non-vegetarian but strict soldier with a wind current flow with bells and chains tied to his body.

Karuppanar worship is a very ancient ancestral clan-based worship system. Most officiating priests are non-Brahmins and derive from local lineages that had initiated the cult generations ago.

The worship pattern is non-Vedic or non-Agamic through Folk tales, Folk songs and Folk arts (Villu pattu, Karagam,Koothhu, etc.). The local priest might offer flowers or Veeputhi (holy ash) or Holy flowers to the worshippers and may play the role of an oracle for Shamanism. Various persons within the clan system are identified to play to the role of oracle on annual turn basis. They undertake vradham and maintain chastity and purity during the period of vradham. During the festivals, oracles get into trance state (Saami aadudhal) and deliver counselling messages to the group assembled there without bias. The normal problems addressed are family problems, financial troubles and local community and social issues for resolving within the community group with the agreement of local ancestral god through oracle.
Whenever the wishes of the people are granted, they give their offerings to Him based on what they vowed to offer.

Karuppannaswamy is a favourite Deity of the Nath/Siddhas. His worship has been integrated into the mode of worship of the Siddhas. Chenthamangalam near Salem has a temple dedicated to Pathinettampadi Raja Karuppannaswamy. This has been erected by Swami Santhananda Saraswati Avadhuta Swamigal.

The village committee would decide on when the Annual mass convention be conducted. The time of the year when this would fall varies with villages and their local customs – each of which will be associated a folk-lore. Generally, the mass convention assembly of a large number of related family members is organized during the spring season for a period of 2 to 3 days.
The commencement of the festival will be with that of a hoisting of the flag and tying the “Kaappu.” After this time, villagers cannot go out of the village but can come in from a different village.
During this annual gathering, a large number of goats and chicken are sacrificed for Lord Karuppanar. He is also offered Beedis (country – made cigarettes) or cigars and Naravam (toddy = locally instilled alcohol) or some form of modern alcohol.
One interesting fact of special mention is the belief of the village people that the Karuppu Sami is being disguised in the form of the priest called as Marulali who is asked to predict the future. This belief system about Karuppu samy is called the Arul vaaku or Saamiyaaduthal in several parts of Tamil Nadu. The social issues will be discussed through these temple fore-tellers (also called as Kodangi) whom the people usually consider as the voice of the Karuppa sami deity. When Lord Karuppa Sami addresses the people in different villages through the Kodangi, different issues and dimensions on the social, cultural and psychological aspects of the village and the society are reviewed for possible solutions.

A unique sacrifice ritual to Karuppu Sami called “kutti kudithal” is famous in Tamil Nadu among the non brahminical sections. In kutti kudithal festival, the goat or lamb to be sacrificed to Karuppu Sami will be their sucked blood in the neck, by the trance dancer, while they are still alive in the sacrificial altar. Even to this day, this ritual occurs in some of the Karuppu Swamy temples, for instance, in Sappani Karuppar temple,Vanapatrai street Tiruchirappalli. The Sandhana Karuppar was the son of Ugra Kali Amman of Tennur, Trichy,The Ondi Karuppar of Kuzhumai Amman Temple, Puthur, Trichy and Sengolathan Karuppar of Kulanthalayee Amman Temple,Woriur,Trichy is very famous for kutti kudithal that occurs every year in the Tamil month of Panguni and Masi, hundreds of goats(lambs) are blood sucked alive by the trance dancer called Marulali who is the representative of Lord Karuppa Sami. In the Tamil calendar, the month aadi is very auspicious for Karuppa Sami. The Kutti Kudhithal Carnival have been celebrated at Puthur and Woriur, Trichy on 10.03.2011 and in Thennur, Trichy, on 08.04.2010. The Next Carnival will be on next year march & April (1st Tuesday to Saturday).

Thungani Pudhu Karrupu swamy located near to Ranjankudi Fort -> Ranjankudi Fort is located 17 K.Ms. North of Perambalur, 8 km from Tholudur.Past two generations back true story was happened and information saying by old people, On the occasion of function time the pujari will through the prsadam in high but it will not come down- if the function will start with male devotees and also female devotees with full clean. And also pudhu karrupu will called as thala vety karuppu (Head Harvester).For tremendous news about karrupu visit this temple.