When we enter into the enterance,first we have to pray the “protection deity of the Alagar malai”,called pathinetaampadi Karuppa Samy. The Legend has it that, Lord Rama had sent Sita to the forest when she was pregnant and lived in Saint Valmiki’s Ashram. While in the Ashram, She brought a male heir of Rama to the world.

One day when she was going out for some chores of the Ashram, she asked the Saint to take care of her child in the cradle. The Saint was watching the child and meanwhile went into a deep meditation. When Sita returned, she found that the Saint was in meditation and didn’t want to disturb him to tell him that she was taking her child.

When the Saint was out of the meditation, he found the child missing. So he put some holy grass (Dherbai) in the cradle and with his mantra he made that as a child. Later when he found that Sita was having her real child, he was so confused and asked Sita to treat the new baby also as her own child. 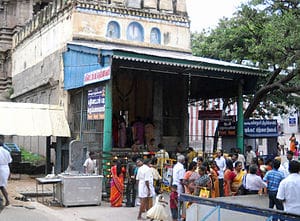 When Sita was returning to Rama, he was expecting only one male heir. But to his astonishment, he found two boys (Lavan and Kushan) approaching him. Again to test the purity of the boys, he set a fire and asked the boys to cross the fire to reach him. He told that whoever was his real heir would cross the fire unscathed. Unknowingly the boy brought up by the Saint, stuck in the middle of the fire and burnt his body becoming very dark.

Finally, Rama got to know what had happened in the forest to have two boys instead of one. Then he blessed the burnt boy to become his escort god (Protection God) and called him “Karuppannan” which became Karuppa Sami.

He wields an “Aruval” which is a very significant weapon in Tamil Nadu and is considered, in itself, as a symbol of Karuppanar himself. Some Aruvals may reach the height of even 5 feet, especially the ones in Thiruppaachhi. The Most Important musical Instrument Which like by God karuppanan are Tappu,Tharai,kombu Tharai,Otha thamukku,Pambai,Udukkai and Urumee.

Another legend has it that,The king of Malabar,was scheming to get the utsavar idol of Azhagar into the Malabar coast and let no thought go wasted.The minister for treasury suggested that the best way to get the idol would be with stealth and magic.

Two days later, 18 people, learned in all sorts of magic, tantra, religious rights and warfare, secretly left for the capital of the Pandia Empire, Madurai. The were accompanied in spirit by the Guardian Deity of Malabar, Malayala Karuppu. Tackling their way through the western and eastern ghats, they ended up at the outskirts of Madurai. Before them, the four towers of Meenakshi Sundareswarar temple thrust high into the skies, twinkling with lights. Ignoring this splendid sight, they turned their heads left. The lonely but equally impressive tower of Azhagar kovil, shone bright in the night lamps.

The arthajama pooja was just over in the temple, and the temple priests were locking up the individual shrines, when it happened. Eighteen large men attacked the temple, with their magic and might. The priests were however, fully equipped for such an attack. Afterall, the presence of a solid gold idol did not come without its share of dangers. They invoked the kshetra palakar for his help and chanting the name of the lord, they went to defend the temple. Within no time, the eighteen attackers lay dead on the ground. The priests buried them just outside the main door, as a symbol of their victory.

It was then that they heard a rustle, like air moving in water. And before them materialised a mighty figure. Dressed as a warrior, complete with a long-sword and matted locks, pitch black in colour, stood Malayala Karuppu. “Oh priests of the temple of Azhagar!!! You have shown immense loyalty and bravery in defending this temple. I am impressed. As a gift to your loyalty and as a penalty for aiding a thieving mission, I will guard this temple till the end of times. I will assure that robbery and other immoralities do not take place in the temple and in the surrounding villages. I will guard the temple, over these very eighteen bodies. In times of trouble, I will come in aid”. Having said this, he suffused into the temple doors, making them glow bright for a moment, before they returned to normal. Malayala Karuppar had taken his place and since he guards over the eighteen bodies of the would be thieves, he is called Pathinettampadi Karuppar and is the guardian deity of Azhagar Malai.

The main doors of the Karuppar temple remain closed most of the year. It is believed that Karuppar resides within them looking over the kshetra and the neighbouring areas. During this time, people worship the door itself as the guardian deity. They smear sandal paste over the doors to reduce the heat of Karuppar’s Ugram and make offerings of long forged swords. Some of the swords are double a man’s height and offer a very frightening sight. The doors also act as the seat of the local Panchayat. People who utter lies in the vicinity of the doors have their lives destroyed by the guradian god’s wrath. Villagers wanting to resolve criminal and civil issues, make the accused promise in front of the doors, the belief being that if he did do wrong and refuses it in front of the door, then Karuppar would give him his rightful judgement. A nominal fee of Rs 6 is charged for any such case brought to the temple doors.

The door is, however, kept open once a year during the Brahmotsava. A strange thing happens that day. The jungles surrounding the temple, which are usually alive and vibrant with the calls of birds, go absolutely silent. Not a single bird is found in the vicinity on that day, and the temperature in the region increases by several degrees above the average. People believe that this is a manifestation of the god and his vented ugram. Special poojas are offered to the open doors before thay are closed again at night, never to open for another 365 days.

Karuppar also takes part in the day to day running of the temple. Every morning, the priest who brings water for Azhagar’s abhisheka has to pause before the doors and promise that the water was indeed brought from the Noopura Gangai and not from anywhere else. At the end of the day, the accounts of the daily activities are laid before him and finally he is also entrusted with the keys of the temple treasury at night. He is also invoked for the protection of the lord and his retinue when Azhagar embarks on his 10 day long trip to Madurai, in the month of Chithirai every year.

And that brings us to the grandest story ever of the Azhagar Temple. One that is enacted every year, to this very day.